It is with great sadness I inform you that my dad and James’s grandad passed away a few weeks ago after a sudden and short illness.

He started playing for Speldhurst in the early 1990s with the likes of Hunter, Dunmall (snr) Booth (snr), Giannini, and Hughes (snr). Whilst he would admit to being in the twilight of his career by this stage there will be certain individuals amongst those who will remember many fine performances in the Northfields post-match! I had the pleasure of touring to Burford with him along with most of the those mentioned and apparently opened the batting with him in one match. My only memory that day was his advice that a large Bloody Mary may cure the antics of the previous evening. As he had been correct with most of the advice 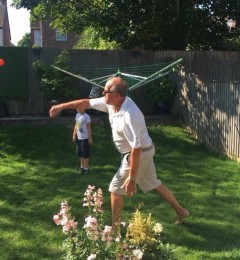 (usually ignored) given to me during his life I decided this was the time to start listening to him – I was bowled in the first over trying to hit the middle ball of the three in my eyeline.

Chris was a funny, caring and loyal husband, dad, grandad and friend and will be missed by us all and the many people who played with and against him or were refreshed by the fine pint of Harveys he served at The Toad Rock Retreat.